Storks: symbols of fecundity or harbingers of unwanted pregnancy? 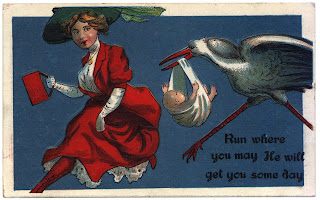 Upon entering the exhibition Virtue, vice, and contraband: a history of contraception in America, you are greeted by imagery of storks, bearing infants, being beaten back or evaded by women who didn’t relish the prospect of motherhood. Such images are perhaps unexpected, but are indeed part and parcel of the iconography of both reproduction and contraception. 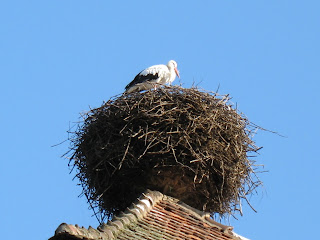 Storks atop a tower in Kayersberg, Haut Rhin (Alsace)

The stork, a symbol of fecundity, luck, and prosperity widely used across Europe, has for centuries been associated with childbirth. In Alsace (my favorite part of France) it is the symbol of that French region (more specifically the Haut Rhin département), and indeed storks perch atop spires and chimneys across the countryside. When confronted with the perennial question of where babies come from (awkward!!), a quick parental out is simply to say that “the stork brought them.” 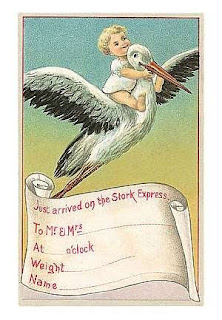 This explanation found visual expression in postcards and announcements sent by prospective and new parents upon the occasion of childbirth. As the predominant icon of childbirth, the stork is closely followed by caggage-patch babies (how many of us recall the frantic parental search for “cabbage patch” dolls at Christmas in the 80s?). Both stork and cabbage patch images are found in abundance in a wonderful book entitled D'où viennent les bébés? by Laura Jaffe and Conce Codina. I came across this book at the Musée Flaubert in Rouen last September and bought a copy for the Dittrick. 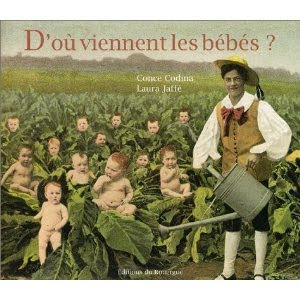 Guest curator of Virtue, vice, and contraband Jimmy Meyer collected quite a few postcards with stork iconography, and added them to the Skuy collection last year. Along with the bouyant, cheerful stork images came some less cheery in character -- images of women (and their partners) frantically fending off or fleeing the stork. These postcards showed that not everyone desired a large family, and many eagerly sought some effective and safe way to achieve that goal.

Posted by James Edmonson at 8:35 PM