Leo J. Latz and "The Rhythm" 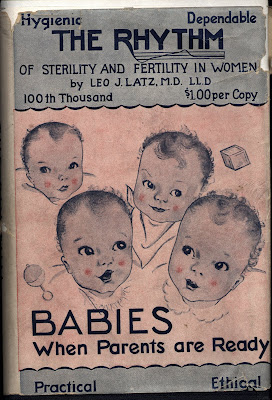 Leo J. Latz, a Chicago doctor, first championed the Ogino-Knaus approach in the United States. He contended that the “findings of modern science disclose a rational, natural, and ethical means to space births and to regulate intelligently the number of children.” In 1932 Latz published The Rhythm of Sterility and Fertility in Women, which sold over 200,000 copies by 1942, and thus "rhythm" made its way into modern parlance. Latz also shared his approach with the medical community via an article in JAMA in 1935.

Latz advised avoiding intercourse for eight days: for women with a regular menstrual cycle, this began five days before ovulation, with an extra three days tacked on for safety’s sake. As a devout Roman Catholic, Latz advanced this method of fertility control as more in line with Church teachings. He published pamphlets on rhythm for priests to distribute to couples, and parish bingo games gave out his book as a prize. Many shared Leo Latz’s faith in the science behind the Ogino-Knaus findings. But applying them to birth control proved not so simple, nor straightforward. Calculating the time of ovulation can still be tricky. It varies from woman to woman, and a woman can ovulate at a different time each month. Stress, illness, or interruptions in normal routine can also alter a woman’s cycle. Despite these uncertainties, the Ogino-Knaus method caught on, as evidenced by the proliferation of rhythm method calculators after 1930. Companies produced graphs, wheels, calendars, and slide rules, which cost from 10¢ to $5.

Despite Latz's enthusiasm, The Catholic Medical Guardian reported in 1935 that “the calculation of the ‘sterile period’ is never easy and in many cases appears to be impossible.” Interest yet remained, and in 1951 Pope Pius XII sanctioned the Rhythm Method as a “natural” method of regulating procreation. In 1955 over 65% of Catholic women surveyed said they used Rhythm.

Ironically, Leo Latz felt biting backlash for all his efforts to bring an acceptable form of contraception to Catholics. Some felt he went too far. When Latz published The Rhythm in 1932 he served on the medical faculty of Loyola University. According to Leslie Tentler, writing in Catholics and Contraception: An American History (2004), Latz "was abruptly fired from that position in August of 1934," and this action "was almost certainly a direct result of Latz's prominent association with the cause of rhythm." In 1935 Latz confessed to his friend Father Joseph Reiner, S.J., that no one "knew the anguish and dishonor I ...suffered, when people said: 'I heard you were thrown out of the University."