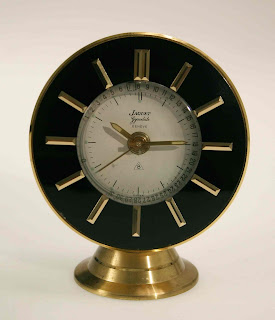 Last summer, when we were thick in the preparation of a new permanent gallery for the Percy Skuy collection, I learned about a later variant of rhythm calculator known as the “Gynodate.” Acquisition of this object was a matter of happenstance; one day, while shopping in the Coventry neighborhood of Cleveland Heights, I ran into Mitch Attenson, a local antiques dealer. Mitch said that he had something for the Dittrick that I would want to see: a calculator for determining fertile/infertile periods of a woman’s monthly cycle. He said that it came from the estate of a spinster teacher (but I didn’t pursue that…). Intrigued, I stopped by his shop, and sure enough, he had the real article.

Swiss clockmaker Jaquet introduced the “Gynodate” in 1958. It combined a regular alarm clock and a gauge to calculate the “safe period” as directed by Hermann Knaus. Jaquet claimed it “indispensable for every woman for natural birth control.” 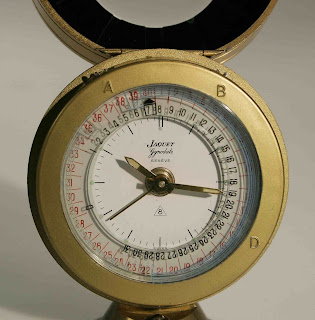 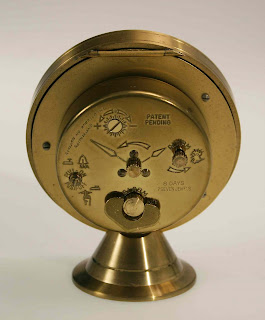 Once back at the Dittrick, “gynodate” in hand, I did some preliminary google searching. Now if you put that word in google, the results are predictable: either porn, or something about making an appointment at the gynecologist’s office – equally uninformative for us, however. I did run across a true hit, mentioning the item in the New York Times in June, 1965. At that date, Hammacher Schlemmer, New York’s premier gift, gadget, and hardware store since 1848, offered the 'gynodate' for sale “to help married couples plan their families.” And the next day “one hundred ‘planned parenthood’ clocks were reported sold yesterday at Hammacher-Schlemmer…for $19.95.” Nothing more of substance, however.

As a last stab at finding out more about the "gynodate" I emailed colleagues at the Museum of contraception and abortion in Vienna, Austria. We’d been in touch before they opened and had hosted museum founder Christian Fiala and his associate Susanne Kresje in Cleveland in 2007. We stayed in touch and I’ve visited the museum in Vienna on two occasions. So I dropped an email to Susanne and Christian, inquiring if they had a "gynodate" clock. Paydirt, kinda. No, they didn’t have the item in question, but would love to get one should I happen to encounter another in my travels (slim chance of that). But they did have some associated ephemera that they freely shared and is posted here. 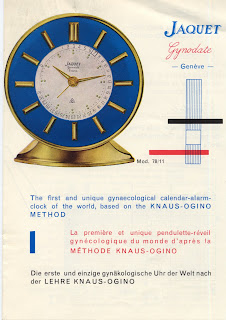 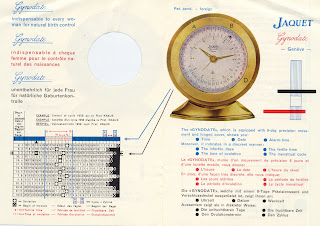 The thing that I like best about the "gynodate" is its stylish concealment of its function. Looks like a nice, if simple, alarm clock when the decorative bezel is closed. But lift the hinged cover and you reveal adjustable dials to set for the onset and end of the monthly period, and hence gauge the days of fertility. Reminds me of oral contraceptive dispensers in the form of lipstick containers or dialpak dispensers disguised as facial powder compacts.

Certainly not the first, nor the last, time that designers strived to camouflage the purpose of a medical device. Sometimes this was done to conceal an object's function from unwitting patients (as in the case of medical furniture in the 1880s), while at other times it was done to safeguard personal dignity, as in the concealment of contraceptive purpose of the object at hand, the "gynodate".