Aristotle’s Masterpiece : the most popular book on reproduction and birth before 1830. 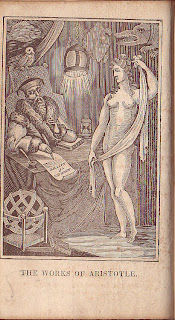 
How did people learn about reproduction and birth control in early America? Traditional folk knowledge predominated, shared chiefly among women, passed by word of mouth. By 1700 a new source supplemented this oral tradition: a curious little book entitled Aristotle’s Master Piece, Displaying the Secrets of Nature in the Generation of Man. First published in English in 1684, copies of the book went on sale in Boston the following year. In time, Aristotle’s Masterpiece became the most widely circulated guide to childbirth and sexual matters before 1830. It said little on the subject of birth control, and instead presented knowledge of the body and childbirth. (Aristotle did not write this book, but the author thought using the name of the Greek philosopher would lend the work authority and prestige.) 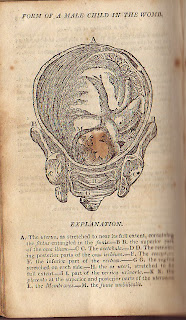 Aristotle’s Masterpiece presented a mix of classical medical writings, 17th century midwifery treatises, and popular folklore. It described sexual anatomy and the essentials of reproduction, as then understood, without the stigma of guilt, sin, or shame. Informative and not intended to be lewd, Aristotle’s Masterpiece celebrated God’s gift of procreative power and the bliss of the matrimonial bedchamber. The tone of the writing at times waxed reverent; at others it bordered on the bawdy side. But throughout it conveyed a sense of discovery and wonder. Since Aristotle’s Masterpiece presented a subject (sex) rarely discussed in polite society, it remained a source seldom openly acknowledged. Medical men did not credit it as a legitimate body of knowledge, while common folk hid their well-thumbed copies under the mattress. Nevertheless, Aristotle’s Masterpiece became a clandestine classic. Some 27 editions appeared in North America; 11 in the 18th century, and 16 between 1801 and 1831.

Here is a flavor of the language found in Aristotle's Masterpiece:

And thus those nobler parts we see

For such the parts of generation be :

And they who carefully survey will find

Each part is fitted for the use design’d :

The purest blood we find if well we heed

Is in the testicles turn’d into seed :

Which by most proper channels is transmitted

Into the place by nature for it fitted :

With highest sense of pleasure to excite

In amorous combatants the more delight.

For in this work nature doth design

Profit and pleasure in one act to join.

The Works of Aristotle, the famous philosopher, in four parts…

Stay tuned for a second post on Aristotle's Masterpiece, with references to historical writings by Mary Fissell that make more sense of the meanings this work conveys to us today.