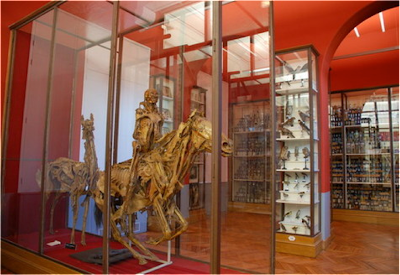 Another somewhat out-of-the way Paris medical museum worth a visit is the Musée de l’Ecole vétérinaire de Maisons-Alfort. Established in 1766 as an adjunct to the royal veterinary school, it opened to the public in 1991, but was in a pretty sad state of repair. That has changed completely. Under the guidance of curator and professor of anatomy Christophe Deguerce, the museum underwent a complete facelift and re-opened to the public in November 2008. It is stunningly beautiful and showcases the collections to advantage, most notably the anatomical preparations of Honoré Fragonard. 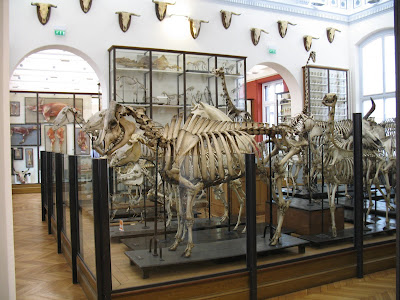 Before we went, we contacted Dr. Deguerce and were lucky enough to spend some time discussing the museum and its renaissance. Ironically, he reported, a variant of the Body Worlds exhibit in Paris, Our Body: À Corps Ouvert, almost shut the doors of the museum. French human rights groups had filed a lawsuit complaining that the bodies were not displayed behind protective glass, and raised issues related to the problematic source of the cadavers. A judge ordered the Paris exhibition closed, ruling that it violated ethical and moral issues related to the provenance of the plastinated bodies. During this case, defenders of the show queried why it was ok for Fragonard’s flayed bodies to be publically seen at the Musée de l’Ecole vétérinaire, but that the modern plastinates were found to be offensive. Fortunately, the Fragonard collection is classed as a monument historique, and is thus valued as part of France’s national scientific and medical heritage. The museum happily remains open and welcomes an increasing tide of visitors

For what it’s worth, the Body Worlds originator Gunther von Hagens hastily distanced himself from that Paris show. I refer those interested in the murky issues surrounding Body Worlds and its clones to a superb article by Jim Connor, "Faux Reality" Show? The Body Worlds Phenomenon and Its Reinvention of Anatomical Spectacle, Bulletin of the History of Medicine (2007). Christophe Deguerce addresses these issues in an online interview (in French, alas, for non-francophone readers), comparing and contrasting the approaches and intent of Fragonard and von Hagens.

I guess the thing that impressed me most is that while Deguerce wants to present the collection to greatest advantage, he is more about scholarship than showmanship (a la von Hagens). He just published two fascinating articles in Clinical Anatomy analyzing 18th century specimen preparation and Fragonard’s injection methods. And Deguerce and conservator Laure Cadot have a book in the works entitled Honoré et ses écorchés; Fragonard, an anatomiste au siècle des lumières. Hopefully an English language version may be in the works, and its working title would be Honoré Fragonard and his «Ecorchés » An Anatomist at the Age of Enlightenment. I’ll keep you posted on any progess on that front.

p.s. - Any reader having difficulty accessing either Jim Connor's article, or Christophe Deguerce's pieces, email me and I will send pdf copies. I may be reached at james.edmonson@case.edu or at 216-368-6391

Posted by James Edmonson at 8:31 AM