Wonders never cease when working with the rich artifact collection of the Dittrick. For a class on the history of epidemic disease, I went looking for some votives to make a link between faith and healing. I knew we had an archival container with small stamped metal votives from the twentieth century, but was surprised when I opened a small jewelry box and found a solid gold coin. 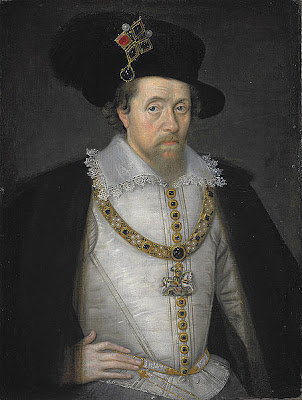 Our accession records revealed that this artifact is a “touch piece” from the reign of James I of England. (He had originally been James VI of Scotland, succeeding his mother, Mary, Queen of Scots; under his reign the kingdoms of Scotland and England were united, hence the term United Kingdom, which he ruled from 1603 until his death in 1625.) So this coin was clearly quite old, and possibly had an intriguing history. There is also a very personal connection here, but I will save that to the end. 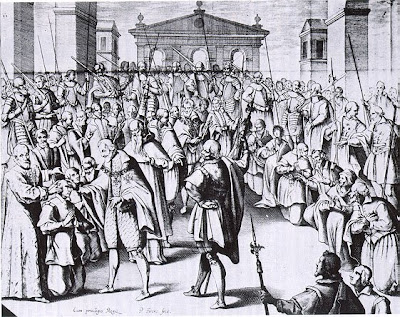 The Dittrick’s “touch piece,” comprised a token given to persons who experienced the “king’s touch,” a healing gesture practiced by kings of England from c.1275 to the end of the Stuart royalty, which concluded with Queen Anne in 1714. In France this practice lasted until 1789. Our British coin is an Angel, in circulation from 1465 to 1642; during the time of James I it was valued at eleven shillings (11s) or 132 pence. 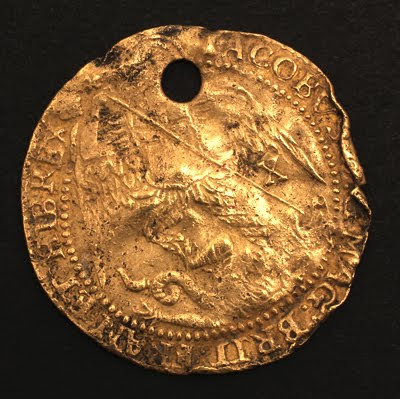 On the obverse, or face, the coin bears the figure of the Archangel Michael slaying the dragon, and around the edge is the inscription Jacobus. D. G. Mag. Brit. Franc. & Hib. Rex. On the reverse, or back, one finds a ship on the waves, with its sail bearing royal heraldry, and inscribed on the edge Domino factum est istud. 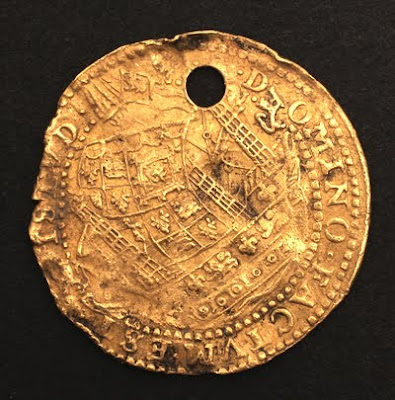 A hole pierces the coin for insertion of a ribbon so that the supplicant might wear the coin after the being blessedly “cured.” Scrofula, or the “King’s evil” comprises the disease most closely associated with this healing ritual. It is a variant of tuberculosis that most commonly affected lymph nodes in the face and neck. In the English court, this practice ended with the succession of the Hanoverians, but in Scotland the Stuart “pretenders” continued it into the eighteenth century.

The royalist John Evelyn described the ceremony as performed by Charles II in a diary entry dated 16 July 1660:

His Majesty began first to touch for ye evil, according to custom, thus: ….the chirurgeons cause the sick to be brought or led up to the throne, where they kneeling, ye King stokes their faces and cheeks with both his hands at once,…. When they have all been totched [sic],… the other chapelaine kneeling and having an angel of gold strung on white ribbon on his arme., delivers them one by one to His Majestie, who puts them about the necks of the touched as they passe….

Now here’s the personal kicker: my daughter had scrofula when she was just 18 months old. Clinically speaking, she had atypical Mycobacterium avium complex, an infection usually seen in individuals with compromised immune systems. We were bewildered and scared, but had a great pediatrician who held our hands through the ordeal. Because of her age, anti TB drugs really were not an option; surgery was indicated and a wonderful (and perfectionist) pediatric surgeon dealt with the infection. It was like living in the nineteenth century, and believe me, you don’t want to be there with a sick child. “Living history” has its place, but not when it comes to illness and disease!

A touch pieces may be seen on display in the Science Museum (South Kensington, London, UK) in The Science and Art of Medicine gallery and on their website. And one surfaced in a dig at Jamestown, Virginia.