We recently refurbished our Castele Gallery to accommodate small temporary exhibitions, particularly to accompany lectures and programs at the Dittrick. For the occasion of Natasha McEnroe’s presentation on safe sex in 18th century London (on March 18@6:00PM), we have mounted an exhibition, as mentioned in our post of Feb 26. We’ve entitled this exhibit The wages of sin: temptation, indulgence, and disease in 18th century London, as seen in the art of William Hogarth. It features prints from William Hogarth’s “novel” series including The Rake’s Progress, The Harlot’s Progress, and Marriage a la Mode. 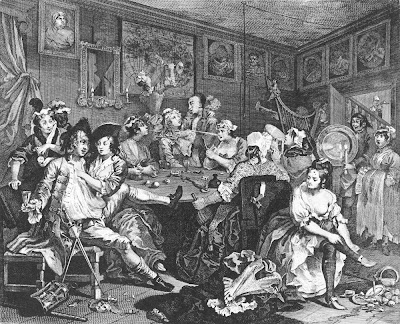 Hogarth's series all tell a tale of innocents seduced, appetites indulged, honor compromised, and carnal pleasures leading to a bad end. Curator emerita Patsy Gerstner did the lion’s share of work on this exhibit, and we thank her heartily for that. For further reading on Hogarth and related topics, she recommends From Hogarth to Rowlandson: medicine in art in eighteenth-century Britain by Fiona Haslam. Just today (March 11) Hogarth’s print series has been wonderfully presented by Lucy Inglis in her award-winning blog, Georgian London. Hear her audio on Hogarth as social commentator in the Harlot’s Progress series. 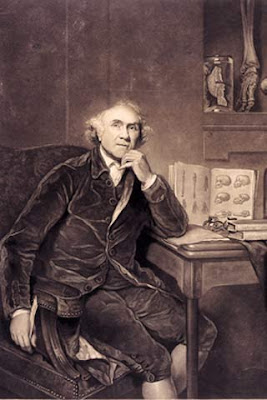 Dittrick staff crafted a companion display of rare books entitled John Hunter : (mis)understanding venereal disease. Hunter believed gonorrhea (“the clap”) and syphilis (“the pox,” or lues venerea) to be different stages of the same disease, as presented in his A Treatise on the Venereal Disease (1786). According to Hunter, gonorrhea comprised the preliminary and local manifestation of the disease, affecting only the genital parts, while syphilis constituted a more generalized, or in Hunter’s parlance, “constitutional” mode of infection. Hunter felt compelled to prove these distinctions via experiment -- on himself. In 1767 he dipped his lancet into the gonorrheal sore of a patient, and jabbed the lancet into his own penis in two places (that’s heroic by anyone’s measure!). Unfortunately, for the success of this experiment, and for Hunter’s own health, he drew the infectious “poison” from someone suffering from both gonorrhea and syphilis. The symptoms progressed from one disease to the other, confirming in Hunter’s mind that he proved the unity of the two diseases. This view held sway until 1838, when Philippe Ricord set the record straight in his Traité pratique des maladies vénériennes.

Posted by James Edmonson at 8:02 PM