Last week, I introduced the "monsters and marvels" of Ambroise Paré. This unique text is not a collection only (or even primarily) of cases witnessed by the good doctor. Such treatises also existed, and became more popular over time. Both Dr. William Smellie and Dr. William Hunter published extensively about their practices, and many doctors described difficult labors or unusual births. Paré's 15th century text is, however, much more a compendium; he collects tales from afar, gathers anecdotes from ancient manuscripts and compiles accounts from myth and local legend. Parts of the book actually discuss strange animals from foreign climes, and there is a fairly accurate depiction of what we now know to be a skate or sting ray. To his readers, these accounts of marvels would be mystery as much as medicine.  The image above left was one of the more verified accounts, and the man in the picture in his mid-forties. According to Paré, many came to see him--as they did other "marvels--and a number of "birth monsters" were put on display for money.

Other descriptions that are fairly well-verified (or at least imaginable) include conjoined twins and babies born with double organs. Below is an account of a man with a second head (rather than a second body) protruding from the naval. 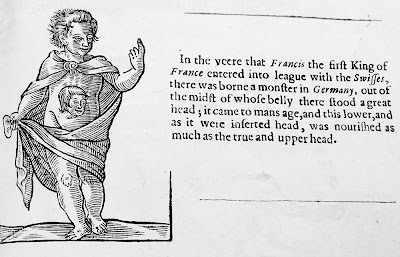 In addition to these figures, Paré also describes some very unusual wonders--including children who appear to be half-animal, are born with fur and claws or tails, or who seem to be a hybrid creature of numerous species. These hybrid marvels are important to consider from the standpoint of midwifery, as the cause of such monstrosity lay blame not only on fate or the stars, but also on parents--particularly mothers--whose imaginations were thought to cause the anomaly. The figure below was thought to result from a woman holding a live frog in her hand to ward off a fever on the night she conceived. (It is to be assumed, of course, that she put the frog down first). 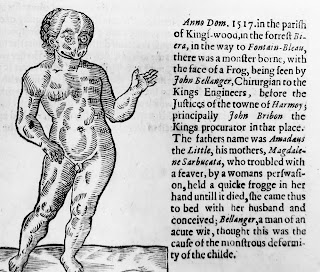 Interestingly, Paré’s sixteenth-century sensibility about the cause of monstrous birth was still present and highly debated in the late seventeenth and early eighteenth century. Joseph Duverney, professor of anatomy (1648-1730), considered monstrosity a problem of divine origin—and divine wrath. Physician Nicholas Lemery (1645-1715), by contrast, believed in accidental origins and Jacques Winslow (1669-1760) suggested “accidental causes could mask metaphysical [that is, divine] forces.”[1] Other major thinkers of the period—from Nicolas Malebranche to Denis Diderot—returned to this question in philosophical works. Malebranche (member of the Académie Royale des Sciences) published Tractatus de inquisitione veritatis in 1753. The text, which was translated into English and reprinted throughout the 18th century, was critical to popularizing the idea that mother imagination could cause birth defects—a devastating assumption also present in Paré, who claimed “monsters should not live among us,” as they could imprint upon the “fruit” of pregnant women because of the “ideas which might remain in their imaginative faulty, over the form of so monstrous a creature.”[2] Two devastating consequences arise from this philosophy. The first is the estrangement and banishment of the malformed individual (and Paré includes among these those who have been marred by accident or illness as well). Such points continue to be made into the eighteenth century; a letter published in The Political State, February 1731, suggests the banishment of beggars, who must surely affect the developing fetus—and delicate feelings—of pregnant women.[3] The second consequence, however, is of longer standing: that is, the continued culpability of mothers in the malformation of their children. Enlightenment medicine did much to elucidate the complexities of generation and birth, particularly as to anatomy, but it did little to dispel the lingering horror of the monster birth—or to curb its enthusiastic reception among a reading public curious for marvels.

Ruth Perry reports on a number of “monster” birth cases in the 18th century, including one about a dead infant being half-consumed by live snakes. It was printed in The Weekly Journal or British Gazatteer on October 20th, 1722.[4] However, it is in fact a re-telling (with embellishment) from Paré’s Monsters and Marvels. In Paré’s account, the child “had a live snake attached to its back, who was gnawing on this little dead creature”.[5] But Paré was citing Lycosthenes from 1494, and for all we know, Lycosthenes was reporting a marvel earlier still. The same may be said of the 365 children of Countess of Hennebrg, 1276; whether fabrication or the result of hydatidiform mole, the story of her miraculous brood was still being circulated well into later centuries—even appearing in broadsheet ballad form as “The Lamenting Lady.”[6] The eighteenth century account of the dead-baby-live-snakes improvises as well, not in form so much as character. The account in the British Gazatteer introduces new agents—a frightened female midwife, and a valiant husband who kills the snakes. In any case, these stories of monster births are perhaps most marvelous for their ability to fire the imagination of successive generations of readers—each adding to it that which was appropriate to their particular historical moment.