Monsters are things that appear outside the course of Nature (and are usually signs of forthcoming misfortune).


Welcome back to the Dittrick Museum Blog! 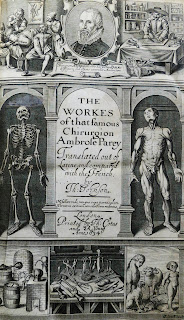 Last week, we discussed the "curious machine" of man-midwife Dr. William Smellie. This week, I will introduce Ambroise Pare and the birth of "monsters." The images that Dr. Paré collected in Des Monstres et prodigies (1573) continued to fire the imagination well into the 18th and 19th centuries, a time that witness the "birth" of Gothic monsters, as well.The Dittrick's collection includes a fine edition of this work, and it is replete with fascinating images, some of which I will introduce today (with more to follow!)

By the time Mary Shelley’s Frankenstein or Prometheus Unbound was published, the Gothic tradition was well established, though still evolving. The early romances that shaped Radcliffian Gothic were both revisited and reshaped by the sublime imagination of Romantic writers (a group to whom Shelley herself belonged.) However, increasing interest in and access to scientific discourse provided additional material; widespread debate about electrical stimulation and reflex, William Cullen and Robert Whytt’s work on the nervous system, and Charles Bell’s theories on the anatomy of the brain were fertile ground for imaginative speculation and certainly part of the cultural context near the time of Frankenstein’s publication. The monstrosity of the man-made man nonetheless has its predecessor in the monstrosity of “woman-made man,” the deformed and monstrous child of the equally horrific and mysterious womb. By the end of the 17th century, scientific societies has begun to question “wonderful” and monstrous accounts, but though wonders “had lost their aura,”[1] the monstrous continued to interest and enthrall (and sell newspapers and side-show tickets). This series of posts will explore the medicalization of birth in the eighteenth century and its representation not only in scientific debate but also in sensationalized news accounts which—like early versions of the “penny dreadful,” circulated tales of terror. London papers, magazines and popular miscellanies published records of horrific births, even as the “orphaned” child and “monstrous” mother became a trope for Gothic fiction.

There are records of unusual, malformed or “monstrous” births in every culture, from early renderings on cave walls to the detailed astrological tables of the Chaldeans and the myths of the Greeks.[2] The first formal collected account of these births is probably that of Julius Obsequens (fourth century), who listed the “miraculous” births from Caesar to his present.[3] However, by the 15th century, miraculous and monstrous accounts had become a genre unto themselves; The Marvels of the East and the 1493 “Nuremberg Chronicle” (based on The Travels of Sir John Mandeville) collected supposed monsters from distant lands[4] —most of which were entirely fictitious, a few of which were likely based upon malformations and physical deformity.[5] However, arguably the most famous of collected “monster” accounts is that of Ambroise Paré, surgeon and humanist of the mid-sixteenth century. His Des Monstres et prodigies (1573) was reprinted (as a full text) for more than 300 years, appearing in English translation as late as 1840 (and, in fact, again in 1982). More interestingly, the work appeared piecemeal throughout the eighteenth century, reprinted in miscellanies, magazines and popular accounts, the anomalous births passed off as current events.

The utility of Paré’s text comes, in part, from its structure. Using knowledge of books on natural 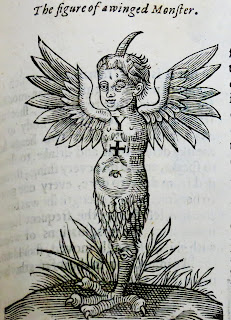 history, Paré wrote a 519-page work on reproduction in two parts—the first dealt with surgical concerns, the second with monster births. Though early records also include miracle births under the “monstrous” (the Greek myths of Athena and Dionysus may be thought of in this fashion) the lexicon was ever-changing. The origins of the word “monster” are debatable; the Oxford English Dictionary suggests a Latin derivation, monstrum, “a warning or potent,” and Paré was clearly concerned with why the “natural” or normalized birth did not occur.[6] The monster is, at best unnatural, at worst, a demonized creature and punishment from God: “Monsters are things that appear outside the course of Nature (and are usually signs of forthcoming misfortune).[7] Marvels, too, are “against nature,” and may—along with monstrosity—reveal the “judgment of God, who permits fathers and mothers to produce such abominations from the disorder that they make in copulation, like brutish beasts, in which their appetite guides them.”[8]

Interestingly, Paré’s sixteenth-century sensibility about the cause of monstrous birth was still present and highly debated in the late seventeenth and early eighteenth century. In next week's post, I will talk more about the influence of Paré's text--and provide more of the images from the Dittrick's incredible edition of his work!
_______________