Welcome back to the Dittrick Museum Blog! Last week, we discussed some of the finer points of birth anomaly in the 18th century. Today, we will consider the ways in which Paré’s work influenced the writers of the nineteenth century! 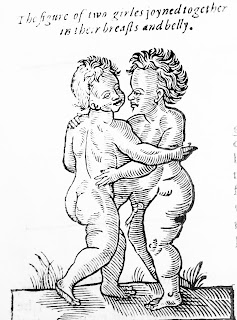 As the Age of Enlightenment, the eighteenth-century promoted scientific and philosophical progress. By the latter part of the century, causation (in reproduction but also in relation to disease) had largely left Pare’s metaphysical behind in medical treatises—but it enjoyed renewed fervor in the popular press. Two broad categories of work regularly printed stories of monster birth. The first were collections of medical or philosophical transactions, like those published by the Royal Society of London. Conjoined twins appeared frequently in these cases. Paré’s suggested cause of these malformations (in addition to the censure of God) was “too great a quantity of seed.”[1] Many of the printed cases from the transactions refrain from discussing causation and instead focus on descriptive account:


This monstrous female birth had two heads, both the faces very well shaped. The left face looked swarthy and never breathed; that head was also the larger. The right head was perceived to breathe; but not heard to cry. Between the heads was a protuberance, like another shoulder. The breast and clavicles very large; about 7 inches broad. It had only 2 hands and 2 feet.[2]

The account also includes a complete description of the autopsy and the weight of various organs with special attention paid to the organs of generation (particularly noted are the size and position of the clitoris and vagina of this female child). A further account from the Royal Society (October 1765) includes a child without a skull, similar to the case quoted at the start of this paper: “It was a female child, come to its full time, in which the whole skull, excepting its basis, was wanting: this was covered with something which had the appearance of red flesh.” The midwife found it to “consist of different membranes; and in a small depression, in a back part of the basis of the skull, lay the brain, such as it was.”[3] Paré also includes accounts of “headless” children [4] and such also appeared as “wonders” in the Travels of Sir John Mandeville: “Headless monsters with faces between their shoulders; Men with tails, and men with horns.”[5] 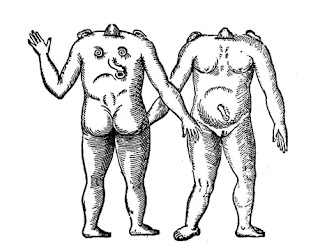 The second category of works that reprinted monster births include the likes of Kirby’s wonderful and scientific museum: or, Magazine of remarkable characters, The Gentleman’s Magazine and Historical Chronicle, The Political State of Great Britain, and The Weekly Journal or British Gazatteer. These pseudo-scientific collections and popular press publications do, no doubt, contain actual data on abnormal births that were circulated in much the same way physical “wonders” were. Marc Cazotte, who suffered from Phocomelia (in which the child is born with hands and feet but neither legs nor arms) traveled in public exhibition as Pépin through the latter part of the century.[6] As Helen King describes: “science and street performance overlapped not only to spread information, but also to instill a sense of wonder” [7] —a strange contradiction considering the “danger” of monstrosity to pregnant women, still a widely held belief. In addition to actual accounts of malformation and monstrous birth, however, collections and the popular press also included fantastic stories of half-human fusions of mythic proportions. And in between these extremes we find curious tales made more curious in the telling, wherein the narrative structure—mimicking Gothic and Romance motifs—create, promote and reproduce the sense of horror.

One extraordinary account harkens back to actual myth; published in The Political State in February of 1731, a woman is “brought to Bed of a Monster, of the Figure of a Satyr.”[8] Similar accounts of animal-human fusions are remarked upon throughout the period, the dog-human being the most popular.[9] Paré’s work—which likely informs or inspires many of these accounts—also includes dog-children, but also cites the reverse, animals giving birth to humanoid creatures (the male owners of which are banished or threatened with death for their abominable “deed”). Similar accounts are circulated in miscellanies and travel documents, from Nathaniel Crouch’s 1710 Admirable curiosities, rarities, & wonders to R. S. Kirby’s first collection, The New Wonderful Museum, and Extraordinary Magazine. Kirby’s modest claim: to provide “a Complete Repository of All the Wonders, Curiosities, and Rarities of Nature and Art, from the Beginning of the World to the Present Year.” A compendium of five volumes, the last published in 1820, Kirby’s Magazine collects and reprints not only from Paré but from the other medical and mythic accounts of monstrosity. Thus, though Paré’s work was increasingly shunned by the medical establishment as mere fiction, writers and readers continued to enjoy, to reprint, and to embellish  his work. Not only does the magazine include monstrous births similar to those reported in medical treatise, it also follows these “monsters” into adulthood, providing stories of bad omens and worse behavior that could easily exist alongside the growing body of Gothic fictions. One of my favorites is the wolf-like boy, who is hairy and chained to the house post by his mother. Another is the "creeping" girl, a woman who never eats but yet stays in blooming health with blood red lips (not unlike Stoker's vampires).

Even though nineteenth-century midwifery leaves Les Monstres behind in favor of increasing medicalization of birth (including the use of ether, beginning in 1848), Paré’s combination of monstrosity and science, serves (perhaps ironically) to engender gothic tales of dreadful monstrosity. By 1812, we have Frankenstein, with its peculiar composite body and male-birth scene. I can give no greater testament to the influence of monstrous birth than to compare that account with one from midwifery accounts:


The whole of that part of the cranium or brain case, with its usual contents, which is naturally covered with hairy scalp, was absolutely wanting, and the foramen magnum occipitis covered with a blood exerescence […] I feared it would survive.

—Dr. Stryker, Letter to the Editor, Feb 28, 1809
His yellow skin scarcely covered the work of muscles and arteries beneath […] his watery eyes, that seemed almost of the same colour as the dun-white sockets in which they were set […] no mortal could support the horror of that countenance. A mummy again endued with animation could not be so hideous as that wretch.

Thus, while Ambroise Paré may not have directly influenced Mary Shelley and her latter-century Gothic compatriots, the sense of wonder, of marvel, and even of horror present in Paré's work lives on to succeeding generations of "monsters." 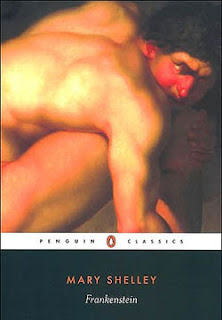