On the Trail of the Machine: William Smellie’s “Celebrated Apparatus"

Welcome back to the Dittrick Museum blog! 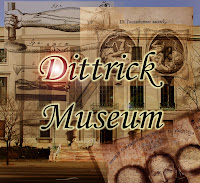 Last week, Dr. Edmonson (curator of the Dittrick Museum), provided a kind introduction to my work. Today, I am happy to continue the tale with part one of a two-part series.

This journey took place over the course of three years, on two continents--and through the wonderful collections of several museums, beginning with our own Dittrick. I give you the tale--of a trail.

--Brandy Schillace, PhD
_________________________________________
On the Trail of the Machine: William Smellie's "Celebrated Apparatus"
What is the lifespan of a medical device? Most generally, the utility of any instrument determines its tenure in medical practice—and subsequent models evolve to replace their predecessors. Amanda Carson Banks tracks just such an evolution in her work on birthing chairs (1999); studying this material helps us to understand why both the definitions and the practices of birth underwent radical change over time.[i] Her work points to a powerful connection between social history and its artifacts—something also provided by scholars such as Brigitte Jordan (Birth in Four Cultures) and numerous anthropological accounts from more specific contexts. But what occurs when we begin not with the artifact itself, but its disappearance?
The question above occurred to me for the first time five years ago, while I was working on my dissertation. While researching a chapter on Augustan women’s education and mechanical habits (now an article with Feminist Formations 25.1 as  “’Reproducing’ Custom”), I came across the most unusual constellation of references. Described, variously, as “this most curious machine,” “this mock woman,” and the “celebrated Apparatus,”[ii] Dr. William Smellie’s mechanized obstetrical manikin seemed to be both science and spectacle, a mechanical woman that “gave birth” to leather dolls before eager students of man-midwifery.  Such an image teased my imagination, so naturally, with the dissertation complete, I went looking for more information about its history and whereabouts. Strangely, however, though crucial to the training of at least 900 man-midwives in ten years, the machine simply vanishes from the records! There are a number of well-preserved and well-documented versions of Madame de Coudray's birthing machines; I’ve seen the primary one at the Musée Flaubert et d'histoire de la Médecine in Rouen, France, and the Dittrick museum has a simplified model from the same period. Remarkably, however, I could find no images, no models, no sketches and no copies of Smellie’s device. Surely, I thought, it must be somewhere… and so the search began. 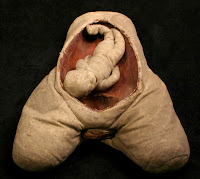 I was already familiar with the extensive collection of birth-related material at the Dittrick Medical History Museum, and so naturally began by contacting Dr. Edmonson. This connection, my curiosity, and what has been at times described as bull-dog-like tenacity, inaugurated a two-year exploration not of the lifespan of the artifact, but its afterlife, a task as fraught with difficulty as any exhumation. In a strange counter to material culture analysis, I had to define what was not by rendering as plain as possible what was—the history surrounding the device itself. What I have pieced together from student notes, detractors and sale catalogs presents a most unusual and often-contradictory picture.
The device emerged during the passionately debated shift from female to male midwifery practice. In a relatively short space of time, man-midwifery developed from the rare intervention of surgeons to a robust practice, wherein the female midwife (if not castigated as a rustic or vilified as a witch) served at the pleasure of the surgeon. This “unexplained revolution”[iii] has captured the attention and imagination of many—from medical historians like Adrian Wilson and Lisa Foreman Cody to literary critics like Bonnie Blackwell and Meghan Burke. A confluence of events led to this shift, including changes in the “bodily and social event” of childbirth with the advent of lying-in hospitals, as well as changes in fashion, politics, and social structure (in the Foucaultian sense).[iv]  It is also true that cases like the Rabbit Breeder of Godalming brought midwifery to embarrassing public notice; in 1727 Mary Toft mimicked birth pangs and contractions and fooled a number of midwives and surgeons into believing she had given birth to a brood of (dead of “still born” rabbits). The case was finally overturned by surgeon Sir Richard Manningham’s threat of live vivisection upon Toft, who confessed to the hoax. In this new model, the mystery of female anatomy would be rendered plain not only through better anatomies, but in part through surgeon’s instruments—and this emphasis gave “birth” to remarkable inventions.
Mechanical automations of various sorts gained popularity in the eighteenth century. There were also a number of obstetrical manikins in use during the period, but Smellie’s mechanized obstetrical phantoms deserve to be treated in a class by themselves. Described as a mechanical genius, Smellie—and his devices—earned the awe of students and even detractors. One of his pupils writes:

[Dr. Smellie was] An uncommon Genius in all sorts of mechanicks, which after having shewed itself in many other Improvements he manifested in the machines which he has contrived for teaching the Art of Midwifery. Machines which Dr. Desaguliers, who frequently visited him, allowed to be infinitely preferable to all that he had ever seen of the same kind, and which I (from having seen those that are used at Paris) will aver to be by far the best that were ever invented.[v]

The apparatus” allowed Smellie to “perform and demonstrate all the different kinds of Delivery with more Deliberation, Perspicuity and Fulness than can be expected on real Subjects.”[i] Even the leather delivery dolls were considered more “life-like” than the child-cadavers used by M. Grégoire’s training school in Paris, for “the Coldness of the Child, the Flabbiness of the Parts, and the skin’s coming off at the least Touch, makes the Delivery seem much less natural than that of the Leather Children.”[ii] The machine itself was “composed of real Bones, mounted and covered with artificial Ligaments, Muscles and Cuticle […] and the Contents of the Abdomen are imitated with great Exactness.[iii] Similar descriptions are to be found among advertisements, tucked into arguments of detractors, and in contemporary pamphlets. Perhaps more mysterious yet is the extended description provided by Dr. Peter Camper.

Tune in next week for Part II, where I explore some of the stranger aspects of Camper's descriptions and discuss the machine's even more mysterious disappearance!