As mentioned in my previous post on the Musée des moulages, there is ample interest in moulages in museum collections, as demonstrated by the proliferation of scholarly works, exhibitions, conferences, and web postings. But I don't think that I gave much serious thought to just how these things were created and what issues that process raised. That changed when I read a recent article by Mary Hunter, "'Effroyable réalisme': Wax, Femininity, and Realist Fantsies," that appeared in RACAR-Canadian Art Review in 2008 (Vol. 33, Nos. 1-2: 43-58).

Professor Hunter explored the moulages at the hôpital Saint-Louis, and particularly the physicians who commissioned them and the artists (mouleurs) that crafted the moulages. Many of the moulages depicted syphilis and gonorrhea, and therefore involved taking casts directly from afflicted male and female genitalia. Got my attention now. Hunter writes, “…casting was an invasive and uncomfortable process as it demanded that wet plaster be applied to open sores, rash-covered skin, and the body’s most sensitive openings. The exhaustive touching of bodes is particularly evident in Péan’s collection of moulages of diseased genitalia.” She raises many issues barely hinted at in the presentation at the hôpital Saint-Louis, particularly the relationship between doctors and female patients, including prostitutes. I commend Hunter’s fascinating and enlightening article whole-heartedly; you’ll never look at moulages in the same light again. 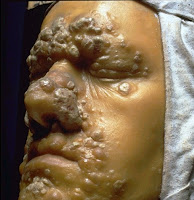 For those who can’t visit the hôpital Saint-Louis, there’s hope. The Musée des moulages website provides online access to a portion of the collection. The site hosts a database of digital images of 998 moulages out of a total of 2500. They include moulages of venereal diseases, like the secondary syphilis seen here. To search the moulages, select "recherche avancée" (advanced search) and then "Moulages Hôpital St Louis" in the "Collection" dialog box.

Additionally, there are at least two online inventories of moulages in the works. As noted in Morbid Anatomy last December, at the Berliner Medizinhistorisches Museum, Thomas Schnalke and colleagues have started the Archiv für medizinische Wachsbilder (Moulagen) [Archive of medical waxes (moulages)] and offer a version in English. In Brussels, Chloe Pirson of the Musée de Médecine (Université libre de Bruxelles - Belgique), has created Le Centre International de Recherche sur les Modèles Anatomiques (CIRMA). Neither site is fully operational but we’ll revisit them from time to time to monitor their progress.

In my next, and concluding, post on the Musée des moulages de l'hôpital Saint-Louis, I'll turn to the use of photography to depict dermatological afflictions. Therein lies an intriguing connection between Cleveland and Paris, and between the collections of the Dittrick and the Musée des moulages...

Posted by James Edmonson at 5:14 PM