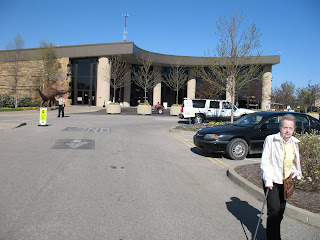 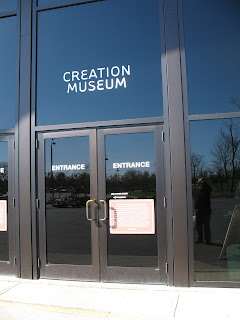 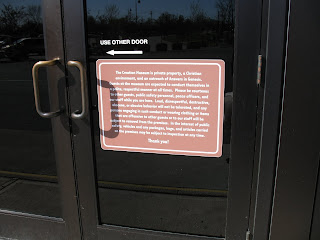 In early April the Dittrick staff headed to Cincinnati for the annual meeting of the Ohio Academy of Medical History. We took advantage of the opportunity to head into Kentucky and check out the Creation Museum, which we had heard a lot about since its opening in 2007. We just wanted to see for ourselves and went there chiefly as a matter of professional curiosity. We anticipated an unusual, quirky museum-going experience and the place did not disappoint.
Now I don’t want to belabor the details because that would give the place more credence than it deserves. The bottom line for me is that it’s not a museum at all (at least, not in my perhaps traditional sense of that word). Admittedly, the term museum has about as much consistency of meaning and definition at the appellation curator, meaning : not much. But I still think of museums as having been created to warehouse things -- objects, artifacts, specimens – for purposes of wonder, study, analysis, interpretation, education, and enlightenment. In a broad sense, the American Association of Museums agrees. On its website the AAM addresses the definition of museum:
American museums are infinitely diverse. The AAM Code of Ethics for Museums notes that their common denominator is making a "unique contribution to the public by collecting, preserving, and interpreting the things of this world." http://www.aam-us.org/aboutmuseums/whatis.cfm

The only “things of this world” found in the Creation Museum are models, dioramas, animatronic figures, videos, and conventional exhibitry. There is just nothing real here. We saw a fake archeological dig, life size dioramas or tableaux of manikins, including Adam and Eve co-habiting the Garden of Eden with dinosaurs, and a panoply of biblical figures in animatronic form (my favorite was Noah, who sounded like an old Russian Jew). Again, just nothing real. I will let our pictures (mine and those by Laura Travis) tell the story. 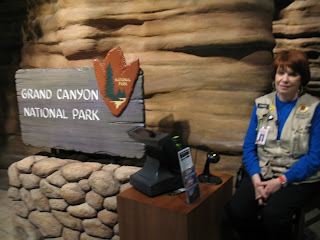 welcome to the Grand Canyon, sort of 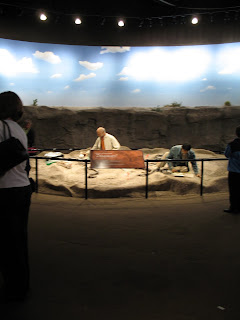 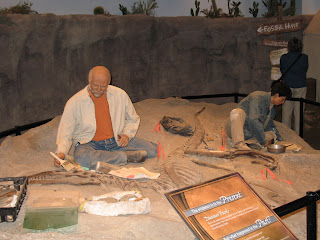 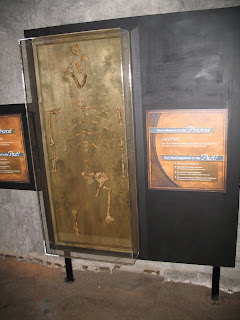 Lucy is here, too, much to the surprise of my curatorial colleagues at the CMNH, including Bruce Latimer, who was on the team that discovered this landmark fossil 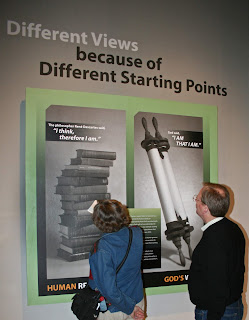 could have photoshopped my baldspot! 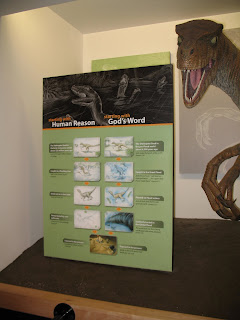 faith vs. reason: more of a standoff than a dialogue 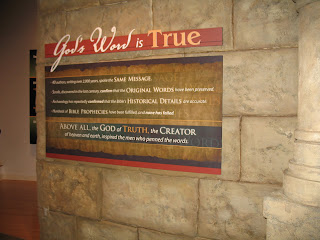 and now for the heavy religious schtick... 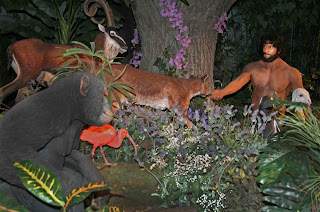 Adam hangs with the wild creatures 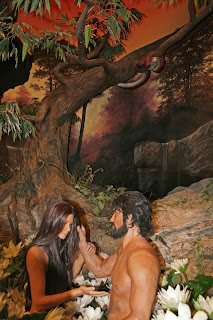 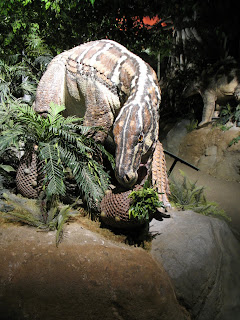 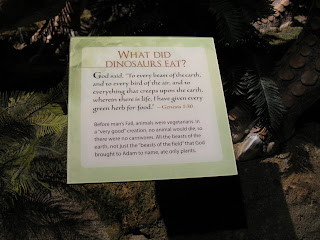 dinos on the ark! 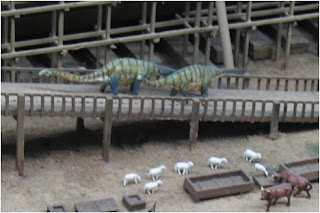 is this a gay dino couple? they sure resemble each other. perhaps passing as twins? 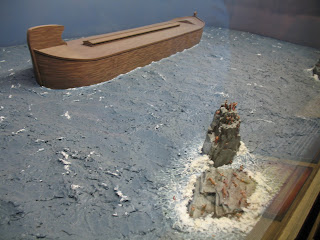 the waters are rising 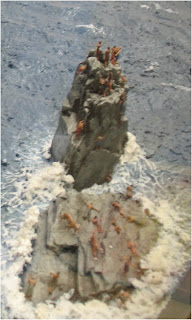 sinners and infidels left behind

So, if the place is not a museum, what is it? I liken it to a theme park, perhaps a biblical Jurassic park. But instead of T-rex chasing after you, teeth flashing, you are hounded by evil and despair stemming from not accepting a literal interpretation of biblical truth. Forsaking God’s word, as found in Genesis, lies at the root of all ills and suffering in the world. 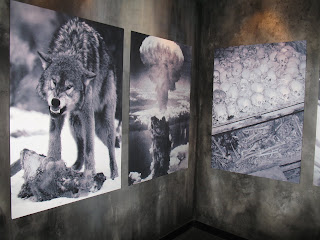 suffering and anguish for the unbeliever 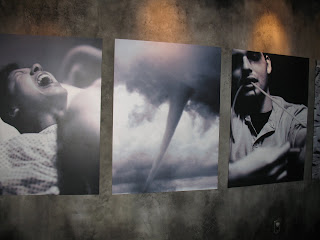 There’s a sinister, dark urban edge to all this, too. 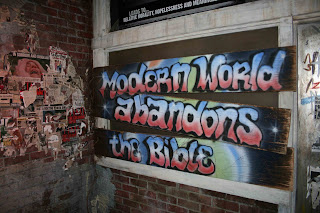 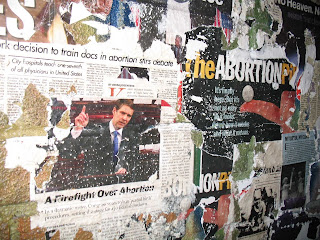 the never-ending fight over abortion 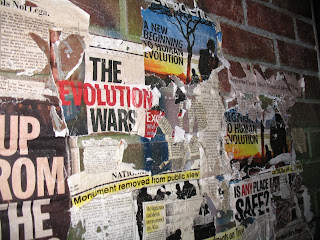 evolution, the biggest challenge to the scripture

So as one leaves the final video, an appeal is made to accept Jesus as your savior. Indeed, I even came away with a pledge card (I think they surreptitiously slipped it into my bag at the “museum” store). 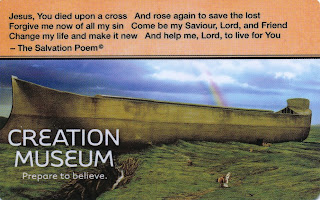 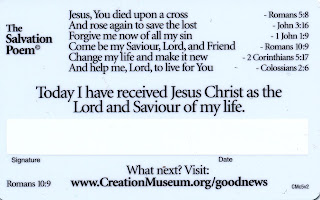 No "museum" is complete without its own store and merchandising program, and the Creation Museum is not to be outdone: 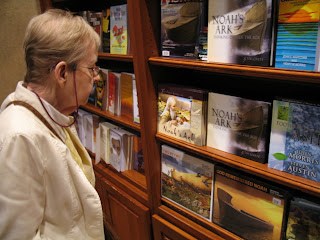 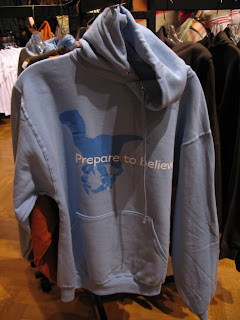 proclaim your belief (your faith, not your reason) 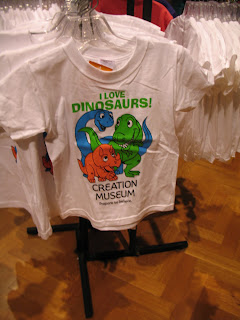 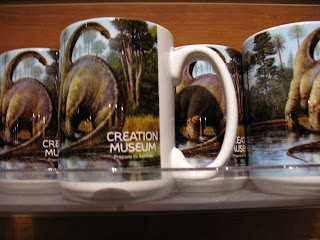 An English colleague, Lisa O'Sullivan (Science Museum) upon hearing that we had visited the Creation Museum queried, “How many visitors are just curious, like you, and not true believers?” I would have to say not many. If you can judge a book (including the good book) by it’s cover, we were in the decided minority. This place is mecca (oops, bad metaphor!) for believers, who finally feel validated that their beliefs are now safely ensconced in a museum, that bulwark of veracity in our society.
Jim Edmonson

For those that want a couple of entertaining takes of the Creation Museum, I encourage you to see the articles by Edward Rothstein, Stephen Asma, and A. A. Gill (accompanied by the actor and photographer Paul Bettany, who plays Darwin in the film Creation).
Posted by James Edmonson at 8:21 PM