Later this month I'll be heading to the Medical Museion in Copenhagen for the workshop, the Sensuous Object, in which I'll be examining early stethoscopes. As part of this, I am trying to figure out who first taught and established and codified the protocols of the physical exam. The irony is this: before 1800 doctors hardly touched their patients, instead relying upon the patient's "history" or story of their illness.
This portrait by Winthrop Chandler, of Dr. William Gleason of Connecticut, c.1780, captures the doctor's reticence of physically examining patients. (Image courtesy of the Ohio Historical Society)
Touching was left to surgeons, a more rough and ready lot.

By the end of the century this had all changed and the physical exam was a cornerstone of medical practice, as seen here in images of Sir William Osler examining, palpating, and auscultating a patient, and then contemplating what he had learned. (Images from the Osler Library at McGill University) 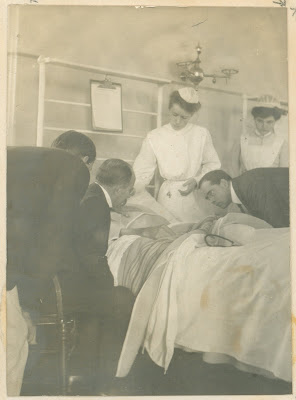 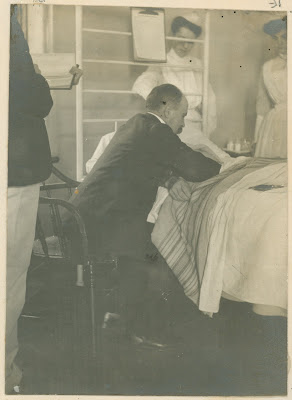 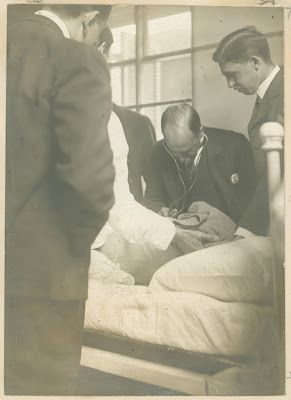 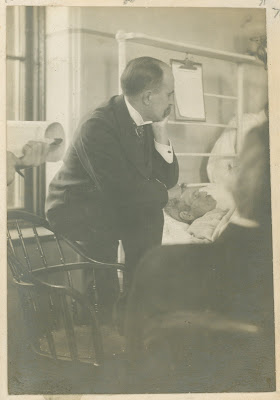 A great presentation on how to conduct the exam is given by John Hughes Bennett in Clinical Lecture on the Principles and Practice of Medicine (1844) and an abbreviated version of the same called An Introduction to Clinical Medicine. Bennett credits Leon Rostan, from whom he learned physical examination as a student in Paris, c.1837.

A little digging reveals that Rostan developed his course around 1818 at La Salpetriere and that it was later codified as Traite elementaire de diagnostique, de pronostic, d'indications therapeutiqes ou cours de medecine clinique (1826) and Cours de medecine clinique (1830). Rostan's description of how to conduct a physical exam makes for exceedingly interesting reading.

I'll report back on both what more I uncover, and what I will have learned from the workshop in Copenhagen.